Despite the cold, it was a well-attended and spirited rally for workers’ rights. Thanks to Audrey Sasson for the photo. 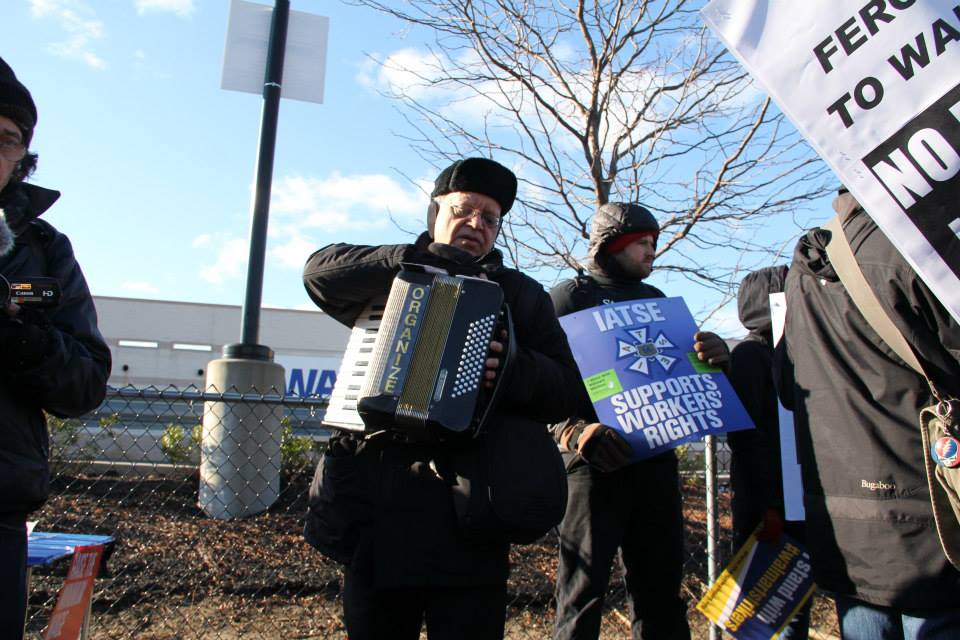 The Filthy Rotten System had a great time with a large, enthusiastic audience at the Peoples’ Voice Cafe and were fortunate to share the evening with talented Michigan singer/songwriter Steve Deasy. We are leader Bud Courtney on rhythm guitar, banjo and vocals, Jim Reagan on rhythm guitar and vocals, Jeff Schneider on lead guitar, Anthony Donovan on harmonica and vocals, Ray Todd on trombone, Brian Hynes on bass guitar, Jack Courtney on drums, and Paul Stein on accordion. Unfortunately, Jack Courtney and Ray Todd are obscured in this view. 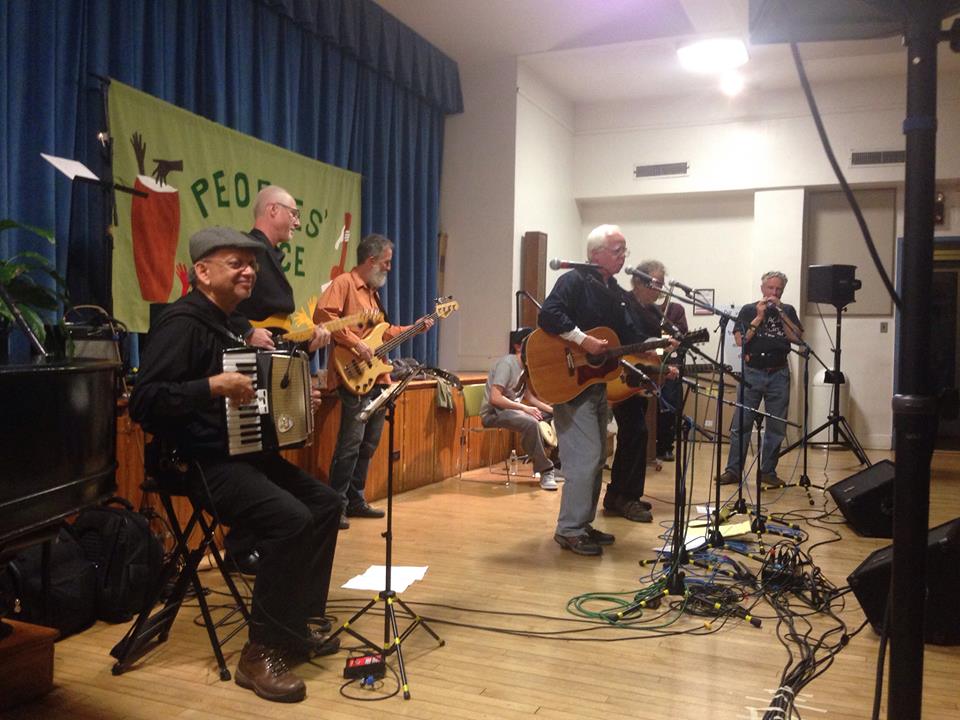 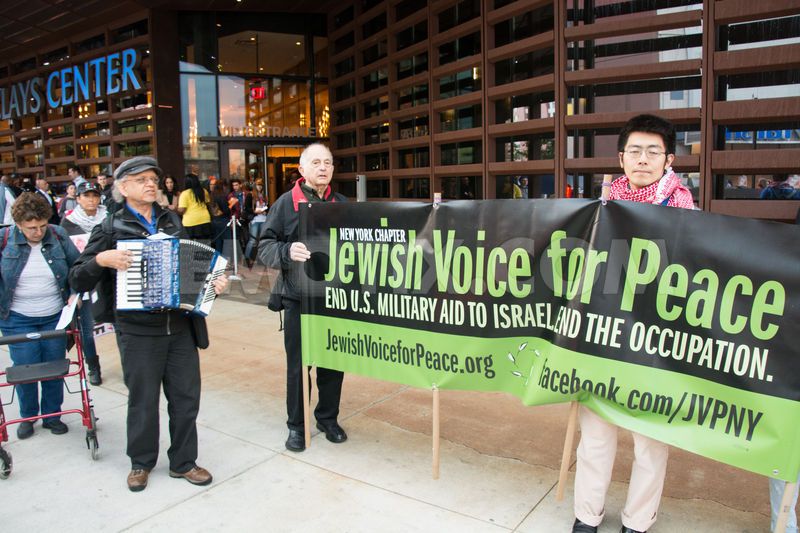 At Barclays Center in Brooklyn on October 7th protesting a visit by Israel’s top basketball team Maccabi Tel Aviv for an exhibition game against the Brooklyn Nets and a fundraiser for the Israel Defense Forces (IDF) that preceded the game. Photo by M. Stan Reaves

People joined in singing this new song I wrote.

Stop Occupation
(to the tune of Hava Nagila)

Palestinians must be free
To control their destiny.
Blockading Gaza must be ended,
Settlements pulled down, not extended.

Bombing Gaza is a sin.
Israeli forces guilty in
Killing children far and wide.
This cannot be justified.

Had a wonderful time playing and singing at the People’s Climate March in NYC. My small Czech Lignatone accordion can be heard above the din of the crowd through a special portable PA system I cobbled together. If you click on the picture, you can see the outlines of the equipment hanging on my sides. For you techies out there: There is a battery-powered (6 double A’s) Roland Micro Cube amplifier on my left hip, a battery-powered (2 double A’s) Galaxy Audio JIB/MM Multi Mixer on my right hip, and one Sennheiser e608 dynamic clip-on microphone on the treble side of the accordion and one on the bass side, each modified with a Sennheiser e908 horn clip and clipped onto a special bracket that I devised. The brackets are attached by velcro to the top of the accordion, so when I play acoustically, I can easily remove them. And the mics can by fed into any PA mixing board through regular XLR mic cables, when I have the luxury of a conventional sound system. Thanks to Resa Del Sol for capturing the moment. 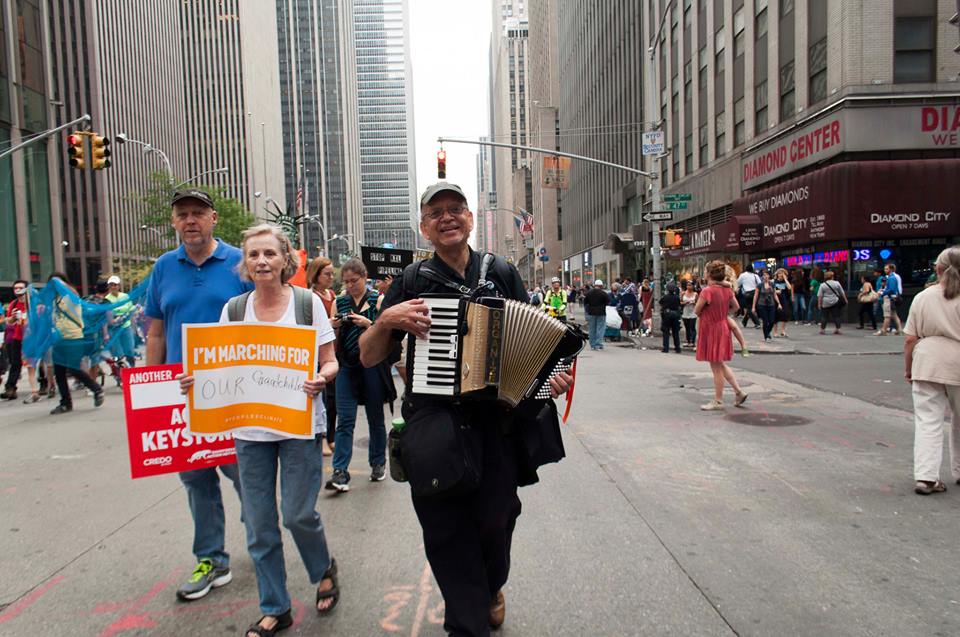 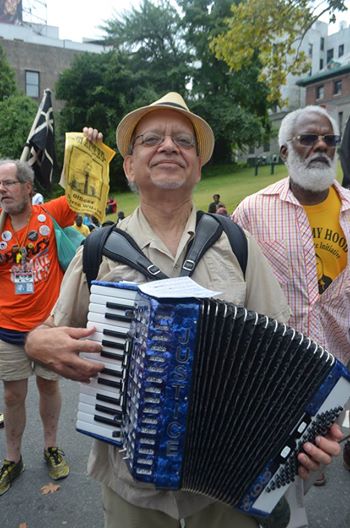 I sang this new song at the March for Justice for Victims of Police Brutality, on August 23, 2014 in Staten Island, pictured above. It has been updated since then.

Eric Garner stood proud at six foot three.
A warm teddy bear of a man was he.
Lived in Staten Island with his family.
Lost his life to police brutality. (chorus)

(chorus)
Check out the video!
It’s plain to see,
He was choked to death by the NYPD.
Another black man cut down in a murder by cop.
We’re here to declare that this killing must stop!

Cops claimed he sold “loosies” in the street,
So they went to arrest him on their beat.
For selling cigarettes, they took his life.
Left behind six children and a wife. (chorus)

As Eric lay motionless in great distress,
EMT’s didn’t rush to treat or assess.
Along with eight cops, they stood around,
Leaving Eric unconscious right there on the ground. (chorus)

The medical examiner confirmed how he died.
The ME’s report said “homicide”.
Justice demands that the cops do hard time
For murdering Eric, a racist crime. (chorus)

There was Amadou, Patrick, Ramarley before.
Anthony, Sean, and so many more.
Now Eric, Michael, and Akai.
We take to the streets so no more will die. (chorus)

We need to work for peace for the sake of children all over the world!
And what could be more fun than playing for young children? 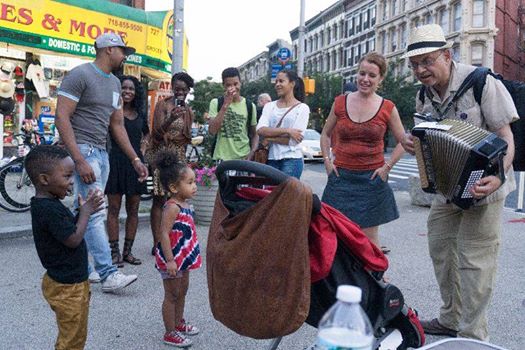 Thanks to Matthew Weinstein for capturing the moment. 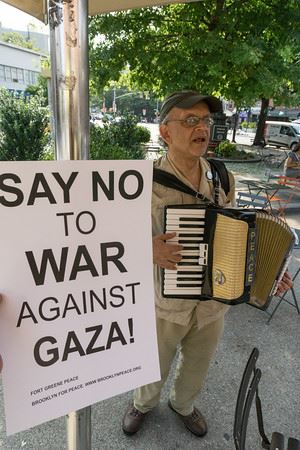 Thanks to Matthew Weinstein for capturing the moment.

Produced by Elliot Crown. Thanks to Owen Crowley for capturing the drama.

To get in touch with Paul, please send an e-mail by clicking on the following link: paulstein@earthlink.net

Click here to find out when and where Paul will be playing next.